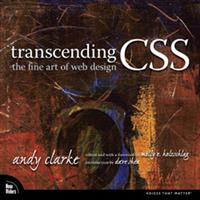 After discovering that a screenshot of my site appeared in Transcending CSS by Andy Clarke, I decided to order this book. That may seem vain but family is easily impressed by it. Who am I to disappoint?

When the book arrived a couple days later, though, I was amazed by the pure style. It's the only book in my entire geeky collection that had my wife give it a second glance. That alone meant it was pretty impressive.

The book is targetted to those who know and who've used CSS but, this isn't a code book, per se. Sure, there's code examples found throughout but it's not really what the book is about. It's about applying CSS in creative ways that take advantage of the power of the web without sacrificing the aesthetics of design.

Jumping into the first chapter, I couldn't help but enjoy it. It really is well designed. The reading is fast and comfortable without feeling overwhelmed by large swaths of text. The sidebars were used well and the photography was just fun to look at (as well as subtley contextual).

Andy does a great job of mixing the practical with the theoretical and covers a good deal of material. The books focus sways between pushing designers to think of code and developers to think of design in new ways.

The first section, Discovery, really tries to explain what Transcendent CSS means and how to begin to approach the process of moving from design to code.

In Process, Andy touches on wireframing and prototyping and how best to approach quick HTML prototyping.

The Inspiration chapter seems to target the developer types, pushing them to look outside (literally) of the online world and into finding inspiration in everyday things; from architecture to a fabulous discussion on grid design to mood boards, there's barely a code example to be found.

Finally, in Transcendence, Andy has us look to the future, demonstrating some nice features of what to expect from CSS3 and even showing off some great possibilities with the Advanced Layout Module.

Is it for you?

This book has a little bit for everyone. Even die-hard standardistas might uncover a gem or two in here. I definitely feel like the book targets different types of people at different times. On one hand, much of the book focuses on designers and how they can learn to take advantage of HTML and CSS to build effective web sites. On the flip side, it seems to push for the technical folk to expand their horizons. Either way, there's lots of great, practical information in here.

I'm still waiting for the official book of all things Snook.

I ordered it last friday so I'm just sitting around and waiting for it. Your post made me even more excited. Thanks!

Transcending CSS just arrived last week at work ... it's been quite the battle between the colleagues to read it :)

Long on style and short on substance. I returned my copy. Would have been worth keeping at one-third the price.

Hoping to receive it for Christmas!

I was looking for a book that would go beyond the sophomoric textbook CSS examples and teach me something that I could apply to real-life designs. While it was a book that approaches real-life designs, I don't think it was a great book to learn CSS. If anyone has a book out there that can do this, please hit me up.

I think this book was incredible, and will continue to be a credible resource as others find it in their hands.

RE: chip
I think you might have been looking for something more along the lines of CSS Mastery, Beginning CSS, or Pro CSS Techniques which provide real world examples and techniques. That wasn't really the premise behind Transcending CSS (As stated by the author in the very beginning of the book).

RE: Christopher
I would recommend the same books I listed above - Beginning CSS Web Development by Simon Collison, Pro CSS Techniques by Jeff Croft, Ian Lloyd, and Dan Rubin, CSS Mastery by Andy Budd, and Bulletproof Web Design by Dan Cederholm. These books give a great foundation and begin to spark your creativity. They focus on real world examples and approaches. Transcending CSS is not bad compared to those books, it is simply a different approach.

Snook, do you lead a double life maybe? Amazon has both Jonathan Snook and Jonathan Snooks as a contributing author in an upcoming book....

Nate: Heh, yeah, I've realized that my SEO needed some work so I'm playing off variations of my name now. :)